There are a range of high-quality publications with the latest discoveries about one of Britain’s most fascinating historical cities. For details of how to order, please see below. 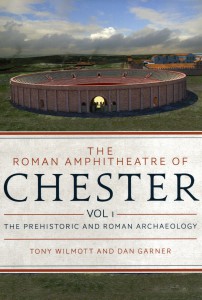 The Roman amphitheatre of Chester, the prehistoric and Roman archaeology by Tony Wilmott and Dan Garner. Vol 1, 2018

This is the first of two volumes dealing with the major research excavations on the Chester amphitheatre in 2004-2006.

The amphitheatre was discovered in 1929 and partially excavated in the 1960s, after which the northern half was laid out as a public monument. Subsequent questions about the future of the site and the original interpretation prompted the recent work which was part funded by English Heritage and the (then) Chester City Council.

The first amphitheatre was built in the 70s AD. It had a stone outer wall with external stairs and timber- framed seating. The second amphitheatre was built concentrically around the first, sealing deposits relating to the behaviour of spectators and the economy of spectacles in the first building. Amphitheatre 2, probably built in the later second century, was the largest and most impressive amphitheatre in Britain, featuring elaborate entrances, internal stairs and decorative pilasters on the outer wall. Sufficient survives to enable a confident architectural reconstruction to be proposed.

Beneath the seating banks of the amphitheatres evidence for prehistoric settlement was recovered – the first substantial prehistoric archaeology to be found in Chester. Occupation began with a Mesolithic phase, followed by a Middle Iron Age agricultural settlement and finally Late Iron Age cord-rig ploughing.

This fully integrated volume tells the story of the site from the Mesolithic to the end of the life of the amphitheatre. It contains full stratigraphic and structural detail, including computer-generated imagery reconstruction of Amphitheatre 2 artefactual and ecofactual evidence, and takes account of the findings of all excavations on the site since 1929. 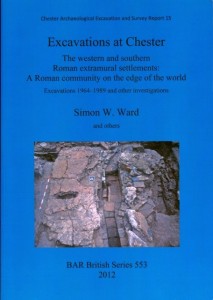 Excavations at Chester. The western and southern Roman extramural settlements: A Roman community on the edge of the world. Excavations 1964-1989 and other investigations by Simon W Ward and others, 2012

This publication presents the detailed results of eleven excavations which attest high-status civilian occupation in a distinct zone lying between the western and southern defences of the Roman fortress and the River Dee. The opportunity is also taken to summarise all other significant discoveries across the whole of the canabae up to the end of 2009.

Building on this data, a series of discussions examine the development of the river channel; the nature of the occupation of the western extramural area and the status of the Infirmary Field cemetery through functional analysis of the small finds; the spatial and chronological development of the canabae as a whole; the origins and size of the civilian population; and the role of the canabae in framing the economy and society of the region.
Pb. xvi + 446 pp. 178ill. ISBN 978 1 4073 0931 6
£55 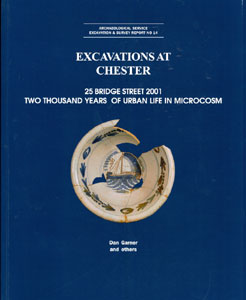 Excavations at Chester, 25 Bridge Street 2001. Two thousand years of urban life in microcosm by Dan Garner and others, 2008

Excavation in the backlands of one of Chester’s main streets, making major contributions to our understanding of all periods of the city’s history – the Roman fortress, burgage plots in the Norman period and the fortunes of city-centre properties from the 16th to the 18th century, reflected in outstanding groups of artefacts related through documentary evidence to the leading Chester families who owned or occupied them.
Pb. xiv + 437 pp. 236 ill. ISBN 978 1872587219
£30.00

Chester amphitheatre. From gladiators to gardens by S Ainsworth and T Wilmott, 2005

This booklet presents the interim results of excavation and research into the Roman amphitheatre at Chester. Part 1 provides the historical background, so that the role the amphitheatre played in the growth of Chester can be understood more clearly. Part 2 acts as a guidebook to enable visitors to appreciate and understand the evidence revealed by the investigations into the amphitheatre itself, and the surrounding buildings and landscape, which otherwise would have remained silent witnesses to over 2,000 years of history.
Pb. 44 pp. 52 ill. ISBN 1872587194
£3.99

In this definitive report David Mason draws together the discoveries made by generations of antiquaries but focuses on the ‘rescue’ excavations of 1963 and 1964. Built in the first century AD, the scale and quality of construction was impressive, and the fortress baths mark an important stage in the evolution of monumental public architecture in the empire. Through phases of rebuilding and alteration the baths continued to function well into the fourth century. Even when left to decay, the buildings remained a prominent landmark in the topography of post-Roman Chester for many centuries.
Pb. xii + 134 pp. 123 ill. ISBN 1872587178
£18.00

Excavations at Chester, the Elliptical Building: an image of the Roman world? Excavations in 1939 and 1963-9 by D J P Mason, fieldwork by R Newstead, J Droop and J Eames, 2000

Detailed structural report on one for the great mysteries of Roman Chester, here interpreted as an abortive Flavian imperial shrine and exhibition, with the Chester fortress briefly intended to accommodate the governor’s residence. The building was eventually completed in the third century to a modified design and possibly served as a macellum. Numerous reconstructions by computer artist Julian Baum.
Pb. xii + 188 pp. 129 ill. ISBN 1872587151
£25.00

Report on excavations and finds 1978-90 with extensive studies of the turf rampart; the date, structure and decoration of the stone wall; the history of the defences after the Roman period; principles of engineering and conservation.
Pb. xvi + 168 pp. 133 ill. ISBN 1872587143
£18.00

Excavations at Chester, Chester Castle: the seventeenth-century armoury and mint. Excavation and building recording in the Inner Ward by P Hough 1979-82, compiled by P Ellis, 1996

Excavations at Chester, the evolution of the heart of the city: investigations at 3-15 Eastgate Street 1990/1 by K J Matthews and others, 1995

Investigation of a site adjacent to the Cross through excavation, survey of the standing buildings and documentary research shed light on the development and topography of this key area of the city: the Roman praetorium, the Saxon market place, medieval ‘Buttershops’, ‘Dark Row’ and Pentice Court.
Pb. vii + 74 pp. 80 ill. ISBN 1872587054
£10.60

From flints to flowerpots: current research in the Dee-Mersey region. Papers from a seminar held at Chester February 1994, compiled by P Carrington, 1994

‘Where Deva spreads her wizard stream’. Trade and the port of Chester: papers from a seminar held at Chester November 1995, compiled by P Carrington, 1996

Eleven papers on the maritime trade of Chester and the Dee estuary from the Iron Age to the end of the 19th century: models of exchange; parallels from other parts of the Roman Empire, Saxon, Viking and medieval Britain; study of ship types.
Pb. vi + 94 pp. 22 ill. ISBN 1872587070
£9.95

West Cheshire from the air: an archaeological anthology by S R Williams, 1997

Excavations at Chester, Saxon occupation within the Roman fortress: sites excavated 1971-1981 by S W Ward and others, 1994

A beautifully illustrated book exploring the city through the ages, looking at the activities of the people who contributed to its intriguing story. Many archaeologists and historians have attempted to throw light on those lives and the author has drawn widely from their work, as well as his own, besides using the surviving historic fabric of the city, to create a book that will appeal to both resident and visitor.
Hb. xi + 132pp. 151 ill. ISBN 978 1 86077 499 7. Published by Phillimore
£16.99

Combines documentary research with the results of fieldwork to present the first comprehensive picture of Chester’s defences in their last phase of military use.
Pb. vi + 38 pp. 23 ill. ISBN 0903235145
£4.95

Planned development of cellared buildings to the south of the former Roman fortress in the tenth century. Reconstruction of the buildings and discussion of the burghal defences. Detailed study of ‘Chester Ware’ pottery with scientific appendices.
Pb. viii + 72 pp. 46 ill. ISBN 0903235137
£5.40

All of these publications (except for Excavations at Chester: The western and southern Roman extramural settlements – see below) are available from:

Prior to ordering, please contact the shop to check the cost of postage and packing. Institutional customers can fax or e-mail your requirements together with an order number, and we will invoice you. A trade price is also available for book sellers.

Excavations at Chester. The western and southern Roman extramural settlements: A Roman community on the edge of the world. Excavations 1964-1989 and other investigations by Simon W Ward and others, 2012 can be ordered directly from Archaeopress: http://www.barpublishing.com/excavations-at-chester.html